The game started with Isles choosing to play uphill –  a play that made loads of sense – work hard in the 1st half to stay in the game then unleash the cavalry 2nd period.

Isles were intelligent throughout – waiting for the opportunity to intercept loose balls then breaking with missile accurate long balls into the forwards.

The Margarets backs took a while to settle into this bombardment on a hot sultry evening and limited Isles to 3 points after 15 minutes – that included some heroic defending by Martin Lumley who similar to his display against Fingallians a few weeks back – launched his body in the way of a sure goal – and came out of that tackle lucky to have his ankle still in tact! These Margarets backs have no regard for their bodies it seems!

The Margarets forwards in that time took a while to get into the pace of a frantic encounter – the Isles players looking fit and ultra motivated for this local contest – but kept the scoreboard ticking over – vital in these close contests. Fine intrinsic play by Paul Lumley, Jason Shanahan, Ciaran Bruton & Thomas Flood kept the scores level with 3 points

Isles were the first to make a statement – and scored the only goal of the half – a high accurate ball into their full forward, who expertly caught, controlled and finished bottom corner. This was followed by 2 further points in a frantic 5 minutes in which the Isles men intercepted some poor kick-outs and dealt the ultimate punishment – Isles now 0-5 (5) to 1-5 (8) up

Play was stopped for 5 minutes due to a nasty head wound to midfielder warrior – Gearoid Farrell – who amazingly tried to play on afterwards! The brief break allowed the Margarets boys to regroup, settle a little and stem the tide. At the resumption, Margarets scored the next 2 points and a breathless first half ended Isles up 0-7 to 1-6 (9)

A inspirational half time talk by Robert Byrne and snippets from mentors Micheal Kennedy, James Fitzgerald and Jamie Nugent rallied the troops – the core message being that they hadn’t actually played any football with any sort of rhythm in that first half and that the time to step up was now!

And so they did – Margarets starting with confidence, moving the ball around, loads of willing runners and fine combinations – and ultimately picked off 3 points without reply to go 1 up – 0-10 to 1-6 (9)

One man seemed to take this control upon himself – the magnificent Philly McCarthy – calling and constantly winning kick-out ball time after time and setting up forward play – the man looked possessed.

With Dave Martin, Declan Cowley and Sean ‘Charlie’ Byrne unstoppable engines and the younger guys – Ciaran Bruton, Scott Kennedy, Sean Flood and Jason Shanahan seriously stepping up – Margarets – as they did against St Monicas and Naomh Mearnóg – used all their experience and guile to slow the game down, keep possession, use the speed of the up and coming clubs major talent – and this seemed to suck the life out the Finglas men!

Isles sensed something was left in this game – and began an onslaught – but again – last minute blocks, forwards following runners, bodies on the line (Pat Daly / John Kennedy) and every man keeping their cool (in particular Thomas Kennedy) – limited Isles to frees which they wasted as they sought that elusive 2nd goal rather than taking their points!

There was relief and exhaustion at the final whistle – both teams realised they were in an intense contest this evening! Not much between them!

Next up for this unbeaten team is a trip to St Peregrines this coming Monday evening at 7:30pm. 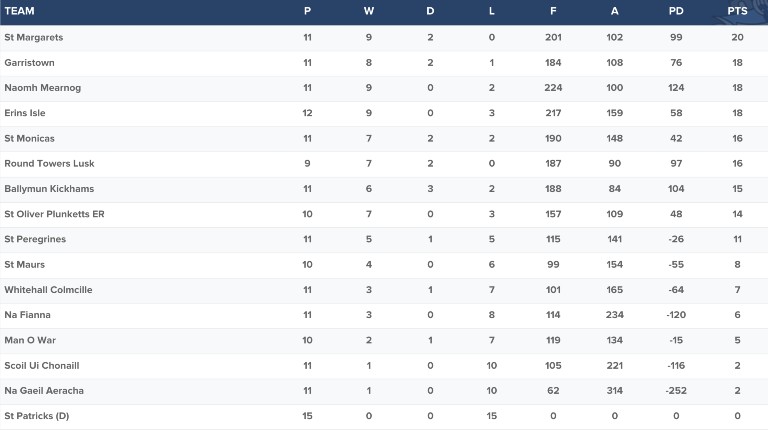 U12 Girls played and won the first ever 15 a side match on a full sized pitch this morning. Great performance. 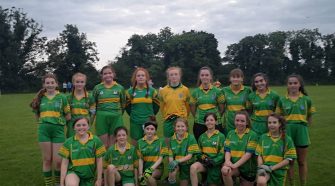