The Juniors kicked off their league campaign with an impressive away win on Sunday morning in sunny Clontarf v Scoil Ui Chonaill.

This was most definitely a game of two halves. The game started with both teams exchanging points from play in the opening 2mins. Playing with a slight wind St Margarets kicked seven unanswered points, some of which were excellent team scores. Scoil responded with points of their own before our lads again took the game to them with an impressive scoring spree which included a goal from Darren Newman and points from Dean Fox, Dave Reilly, Charlie Byrne and Adam Kennedy. Scoil let us off the hook with a missed penalty with the last kick of the first half. This was a excellent half of impressive football and St Margeret’s lead by 1-16 (19) to 0-05(5) at the break.

A Dave Reilly point early in the second half extended our lead and as expected Scoil responded with an all out attack on our goals scoring one goal and four points without response. St Margarets settled back into the game with two excellent points from Jamie Sutton and Philly McCarthy. Again the home side responded with another three points before substitute Paul Lumley kicked a late point to seal the victory.

Lots for the players and management to think about but all in all it was an excellent away win in our first competitive match in months. We just want to give recognition to the extended panel especially the lads that didn’t get game time. These lads train hard every session and push each other each and every time. No doubt when called upon as we progress through the competition they will be ready for action.

Thanks to everyone for the support at the game. Great to see the 1st team lads in attendance to support the Juniors.

Next Junior Ladies start campaign with thriller at Mobhi Rd

Time to dust off the runners. Hope you can join us for a walk in the club. Please share with friends and family. Eveyone welcome.

Brilliant performance by our U11 girls this morning against Chlann Mhuire 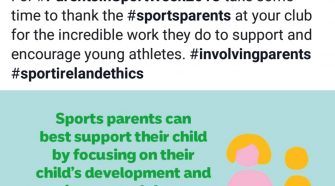