St Margarets reigned supreme in this latest Go Ahead Adult Football League Division 11 North encounter on a cold night in Garristown making it 2 wins out of 2 having put Na Fianna (1-06 to 4-10) to the sword 2 weeks previously.

It was a very even contest from start to finish with the lead yo-yoing by the odd point. Garristown seemed to have learned a lot from their friendly encounter with the same opposition 3 weeks previously with a lot of personnel changes, positional changes and a huge bench.

Garristown started off brightly playing down hill with plenty of runners off the ball, their fast thinking half backs and half forwards working well to conjure up 2/3 points.

St Margarets got to grips with the pace and started to hold the ball more, some nice scores followed including a goal by Jason Shanahan and a few long range points. The Margarets defenders were well organised and well marshalled by the ever impressive John Kennedy.

Garristown once again started fast in the 2nd half and scored 2/3 points without reply – the up hill seemingly suiting their patient style with St Margarets once again struggling with the pace and not being able to pick out their forwards down hill.

But a goal from the lightening Steven Maundsley who replaced Breffni Conaty at half time – assisted by the ever impressive centre half back Pat Daly – settled everything down and Margarets once again gained their sense of control in the game. You simply can’t question the sheer grit of this Margarets side!

Scores from Graham Murtagh and Ivan Smith and calm ball retention by substitute Jamie Nugent and Declin Cowley helped Margarets stay in the game as Garristown’s quick thinking midfield and forwards nudged them into a 2 point lead 10 minutes remaining.

A key incident in which the heroic Pat Daly put his body on the line to defend a quick Garristown break almost led to the player being sent off, the resulting free was turned over, played nicely down to the Margarets forwards and ended in a Tommy Flood goal! Margarets led by 2!

What followed was super game management – as they did against Na Fianna, Margarets kept possession for the final 5 minutes to see it out 0-12 to 3-5 to make it 2 wins from 2.

This team is ever improving! next up Ballymun Kickhams March 20th.

Anyone looking for a hill or stand ticket?

Paul Doyle talks about his association with St.Margarets 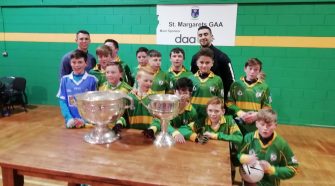