St Margaret’s 2-20(26) Beann Eadair 1-05(08)
The Junior men continue their impressive league form with an away win Sunday morning in the picturesque Howth against Beann Eadair.
We arrived here in great form on the back of a league win midweek and this continued immediately from the throw in. Drew Barnwell scored within 30 seconds of the start and we then tagged on another three unanswered points from Charlie Byrne(f), James O’Connor and Dave Reilly before Beann Eadair scored a goal in the eighth minute to reduce the deficit. This gave us something to think about but we responded in the perfect way with a great team goal of our own finished off by Drew. Both teams then exchanged points for the remainder of the first half with St Margaret’s coming from play by David Martin, Darren Newman and Dave Reilly. Everyone was working hard to win possession from our own kickouts and James Kennedy picked out Darren Newman of numerous occasions to set up attack after attack. St Margaret’s lead by 1-10 (13) to 1-03(6) at the break.
Beann Eadair were reduced to 14 men which ended the game as a contest and St Margaret’s were rampant outscoring our opponents 1-10 to 0-02 in the second half. A special mention to the lads that didn’t start the match but when called upon to come into the game took their opportunity and scored an impressive 1-06 between them. Jason Shanahan and Ossie McGuinness in particular were excellent. This gives the management team lots of food for thought for our upcoming fixtures.
Our large panel is proving invaluable to us in recent weeks with injuries and holidays. The attitude has been brilliant by all.
Scores: Dave Reilly 0-06 (2 frees), Drew Barnwell 1-01, Jason Shanahan 1-01, Charlie Byrne 0-02 (1 frees), Ossie McGuiness 0-02, James O’Connor 0-01, David Martin 0-01, Darren Newman 0-01, Derek Barry 0-01, Adam Kennedy 0-01, Dean Fox 0-01, Conor Howard 0-01, Marc Thomas 0-01.
St Margaret’s: James Kennedy, Ronan Howard, John Kennedy, Paddy Winters, Richie Rooney, Dave Martin, Adam Kennedy, Damien Murphy, Tony Stritch, Darren Newman, Dave Reilly, Derek Barry, Charlie Byrne, Drew Barnwell, James O’Connor.
Sub Used: Marc Thomas, Conor Howard, Jason Shanahan, Dean Fox, Ossie McGuinness, Neil McGuirk, Shane Sutton.
Upcoming Fixtures – Challenge v Fingal Ravens on 29.07.21 in St Margaret’s @ 8.15pm League v St Pats Donabate on 08.08.21 in St Margaret’s @ 11am

Previous Victory for our U14 girls team today

Good luck to our U12 girls in their home blitz this Saturday June 22nd. Throw in at 1pm. All support welcome. 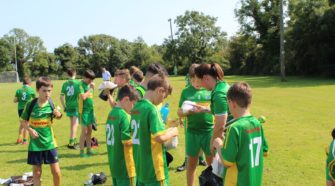