So after a disappointing defeat to Garristown in our last league outing the Juniors responded as we expected with another away win on Tuesday evening in Malahide v St Sylvester’s.

The game started at a ferocious pace with handling errors from both teams due to defensive pressure and the conditions after it had poured rain all day.

Both teams exchanged points early in the first half, with scores coming from Charlie Bryne from a free and both Drew Barnwell and Derek Barry from play.

Just before the first half water break Derek Barry scored a goal with an audacious lob. It had us all confused whether it was a goal because it hit the back goal stanchion and back into play.

Luckily the referee was in the correct position to see it and award the goal to the dismay of the Sylvesters players.This galvanised the team as we scored 1-03 unanswered from play in the second quarter. These scores included a well worked team goal scored by Dave Reilly and points from Charlie Bryne, Derek Bary and John Colgan.

We did sustain some serious pressure in defence as Sylvesters tried to reduce the deficit before half time, James Kennedy pulled off a fantastic double save to keep us in the driving seat. St Margeret’s lead by 2-06 (12) to 0-04(4) at the break.

As expected Sylvesters responded in the second half and scored four unanswered points early on. Charlie settled us again with a point from play but the home team kept on pushing forward. The St Margarets defence was immense again to withhold the onslaught. It proved again the importance of a strong panel as Paul Lumley and Richie Rooney came off the bench to kick points from play while Jason Shanahan and Conor Howard came in with fresh legs to bolster the defence.

Again the home side responded with another three points before Charlie again kicked a point from a free and another from play to seal the victory. St Margarets’ game management over the closing minutes was very impressive.
We just want to give recognition to the extended panel especially the lads that didn’t get game time.

These lads train hard every session and push each other each and every time. No doubt when called upon as we progress through the league they will be ready for action. 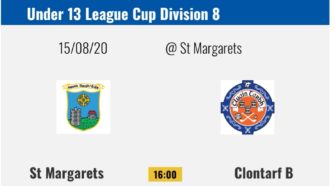