As many commentators expressed – this isn’t the lower devisions of old – this is a generation of fit, highly motivated players who give everything for their club and team mates.

This was end to end like you wouldn’t believe in this sport. Round Towers Lusk coming to knock their challengers off their perch!

Looking at the league table, Round Towers hadn’t lost a single game in this campaign (an unfortunate COVID ridden W/O  against Naomh Mearnóg) and wow did they bring to this clash – a young, fit, mobile, intelligent pack of ultra hungry ANIMALS! There was no doubt before this clash – looking at this highly motivated squad – that Margarets were ripe for the picking!

Margarets have bet teams in this division with a huge mixture of experience and youth – a few teams complaining about several of the squad being too young – but this evenings clash brought to the fore, 2 clubs and teams that were genuinely focused on bringing through youth under the guidance of experience!

A clash of the titans ensued

Round Towers chose to play downhill in the first half and started brightly – their mobile, fast team passing with great accuracy and pace scoring 0-2 within the first 5 minutes.

There is nothing to excite the hard core of Gaelic Football than seeing a mobile team like this Round Tower side combine accurate passing and intelligent movement to conjure opportunities – but this is the state of play in Lusk – all of their teams are full of talent now – this is a club truly destined for the stars!

Having said that – Lusk in the opening 15 – could have been another 5 points up was it not for some really narrow wides! They’re inaccuracies more to do with the feverish defensive unit of Tucker Daly, Robbie Lumley and Thomas Kennedy putting in last minutes tackles!

Margarets were still feeling out this opponent and it was hard to understand whether they were intimidated by the challenge! Round Towers were swaggering with confidence and seemingly destined to take over at the top!

But this side have had many challenge this year – and this side have been behind many times – against more physical teams – where there could have been no way back (Mearnog, Erin Isles) – and they slowly started to work the ball up the park and settle

But mid way through the first half – the unthinkable occurred – St Margarets had a man sent off with a straight red! As occurred in the previous encounter with Peregrines, star midfielder – Philly Mc Carthy received a straight red for an awkward tackle! It was late and it could have been nothing – but the ref decided that it was overly aggressive and Margarets were down to 14 with 15 minutes played!

What ensued for the next 7 minutes is how every team reacts to having a numerical advantage – hold the ball and let the side line figure it out in time! Round Towers moved the Margarets half backs and half forwards around with the ultimate ease and calm. Shell shocked – Margarets tried to cover spaces and man mark – but the ultimate punishment came a few moments later when Round Towers inflicted the first hammer blow of the game – a goal from a well worked passage of play by the Lusk forwards!

At this point earthly teams might have lost their heads (as seen by Monicas) – and this is not saying St Margarets didn’t initially as they tried to manoeuvre from the storm – players arguing, the sideline being warned, the referee being berated – but eventually the leaders took control – Declin Cowley, Pat Daly, David Martin – calmly figuring out positions and talking to younger players – Margarets gradually came to terms with the Lusk bombardment – limiting this relentless team to a single point! actually extraordinary! – every man out on their feet covering for each other!

Lusk seemed to tire! they couldn’t figure out the chaos! They had 6-7 minutes where they battered their opposition but they seemed to run out of ideas due to the tight, aggressive marking that Margarets had to switch to – it was like Margarets had the extra man!  The Margarets men were working over time for each other – everyone moving, everyone supporting one another – it was enthralling to see this collective movement of lads refuse to give this season up without the biggest of fights!

The previous week – Margarets (v Peregrines) had been spooked with the ease at which a 14 man unit can cause the right sort of chaos to win any game – and on this occasion they realised just that – firmly taking the wind out of Round Towers sails and putting doubt in the minds of this whirl wind side!

Margarets sensed blood – and conjured up 10-15 passes for Paul Lumley to eventually be fouled in the corner! After the referee deemed Lumley to have retaliated, the hop ball was won furiously, the ball quickly passed to Jason Shanahan who scored a wonderful long range point to make it clear – Margarets were going to fight for everything!

Margarets had their tails up and the sudden realisation from the Shanahan point that this game was alive energised everyone – lads now on their toes – and what culminated next was a flowing move straight from the kick out! A wonderful catch from the kick out by the extraordinary David Martin started a 25 pass move and ended with the astonishingly talented Scott Kennedy bursting the net! Unreal drama!

If Shanahan’s point energised initially, Kennedys goal was the catalyst that really made them believe that 14 men could cope with the certain onslaught in the second half!

The drama wasn’t over!

Having pulled a point back, Lusk thought they were in again on the cusp of half time! They moved the ball brilliantly down the park, always passing to a free man then suddenly down their right, their corner forward broke free and was barrelling down on goals – the only option was for Thomas Kennedy to attempt a last gasp tackle and leave his full forward – but keeper Richie Cantwell saw the pass and managed to safe from point blank and clear! It was going to be one of these games – the ebb and flow unbearable – Margarets got in at half time with the smallest of damage from the sending off!

The low scoring nature of this encounter reflecting the gravity of this tie – essentially a winners take all encounter!

There was a sense of huge relief at the break with lads sprawled around the place trying to recover from a gruelling encounter. Management met in a huddle with coach Robert Byrne plotting out the 2nd half and how his team were going to deal with a free man. Eventually management relayed that information.

What strikes this author about this team is that there doesn’t have to be shouting to get information across – Byrne explained what was going wrong and how to fix it – and his players listened and understood how they were to set up and play. There are also major leaders in this team – Declin Cowley, Thomas Flood, Pat Daly, David Martin, John Kennedy who just work everything out!

Tactically Byrne and his management team moved Ciaran Bruton and Scott Kennedy to the half back positions where they were given instructions to mark loosely and break when they could!

The final words from Byrne said it all – leave nothing out there!

Lusk were playing uphill in the 2nd half and started as you’d expect – fast with strong runners everywhere. They tried to play accurate long alls up the wings and had runners through the center – Margarets half forwards had no choice sometimes to track back and stick with the runners.

Great to see Gearoid Farrell back playing in this game – no damage done! Warrior!

Well done to our Ladies team. Successfully through to the Championship Semi Final next week after beating Skerries this evening 1g 11p to 0g 7p. @stfiniansgaaswords

U13 girls February ‘Trainers of the Month’ … Emma, Hannah & Keelin

Well done to our U11 girls who had their first match of the new season today. 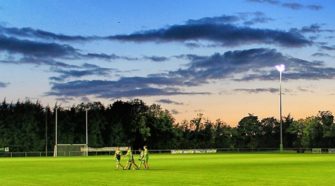