St Margaret’s 0-16(16) Naomh Barrog 1-10(13)
Great league win Tuesday evening at home against Naomh Barrog.
Both teams exchanged a point a piece in the opening two minutes before St Margaret’s kicked on with an impressive three unanswered points from play from Derek Barry (2) and Darren Newman. Unfortunately against the run of play Naomh Barrog won a turnover and made the most of it with a well worked goal to get them back into the game. As always our lads responded with some excellent football which resulted in us scoring the next four points. More impressive was how we were winning possession of our own kickout, James pinpoint kickouts were hitting their targets, made a little easier by all the lads working hard for space. St Margeret’s lead by 0-09 (9) to 1-02(5) at the break.
St Margarets again started the half brighter with three excellent unanswered points from Adam Kennedy, John Colgan and Dave Reilly. Damien Murphy played really well after coming off the bench at half time and was awarded with a really well executed point just before the second half water break which was enough to keep Naomh Barrog at arms length for now. Barrog were the stronger team in the last quarter and pushed hard to get back into the game. This pressure led to us conceding too many frees in scorable positions and also resulted in a second yellow and black card for St Margarets players. With 13 men for the last few minutes the lads dug deep and Charlie kicked a great point at the death to settle everyone and secure a super win.
Scores: Dave Reily 0-04 (2 frees), Derek Barry 0-03, Charlie Byrne 0-02, Adam Kennedy 0-01, Darren Newman 0-01, Drew Barnwell 0-01, Joe Gilligan 0-01, John Colgan 0-01, Damien Murphy 0-01, James O’Connor 0-01.
St Margaret’s: James Kennedy, Ronan Howard, Dave Martin, Paddy Winters, Ryan Milling, Tony Stritch, Adam Kennedy, Joe Gilligan, John Colgan, Darren Newman, Dave Reilly, Derek Barry, Jason Shanahan, Drew Barnwell, James O’Connor.
Sub Used: Damien Murphy, Charlie Byrne, Marc Thomas.
Next Match – League v Beann Eadair on 25.07.21 in Howth @ 11am

Victory for our U14 girls team today

Have you been added to yet another Team Whatsapp Group?

Well done to our U11 girls. Fantastic performance against St Peregrines today. 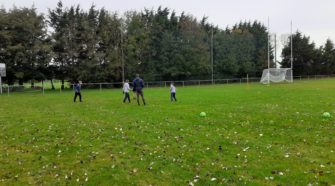