St Margarets GAC would like to wish Mick Joyce our sincerest congratulations and thank him for all his service to the game after he announced his retirement from referring after 40 years!!!

Mick from St Colmcilles, Swords was 1 in a million on the field, a referee ahead of his time – 1st instinct was always to let the game flow! As would be popular opinion – Mick was strict but always fair!

And always good for banter – before, middle and after:)

It’s astonishing how long Mick has been in the middle really – as there are 2/3 generations who remember him!

Mick’s pure love of the game kept him involved so long and he’s still an avid supporter of North County football and can be seen at matches throughout Fingal!

Best of luck Mick and thanks!

Next Legends of the club: Majestic Mick Kennedy was a top-class defender with St Margaret's

Club Summer Camp – Time is running out to Register!

U16 Girls win first match of the season 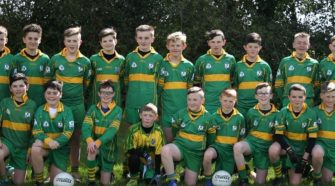